HomeFAQWaste to energyHow to disposal waste tires and waste plastics ?

How to disposal waste tires and waste plastics ?

Nov 25, 2014/ Waste to energy/ Chat online/ Leave a message
Waste tires is known as "black pollution", its recovery and processing technology is a worldwide problem, disposal of waste tires, has long been a problem of environmental protection.A large number of abandoned old tires caused serious pollution to the environment, if cannot be handled effectively, can cause serious damage to the environment, waste the precious resources of rubber at the same time.For the waste tyres recycling, the use of good, for profit, victims, waste in the world for tyre recycling have done a lot of research, obtained the various kinds of methods for recycling tires, and tire recycling was applied to various fields.

Turn over the tire industry is an important component part of the rubber industry, renewable resources and use part of the environmental protection industry.Renovation is the main use of waste tires, and the best way to have worn, outer peel to waste tires, rubber paste, to cure to use [1]. 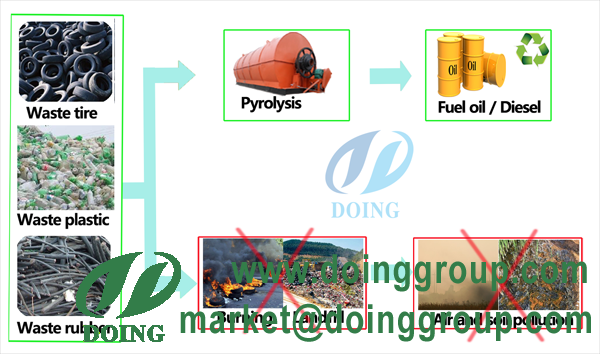 The best way to disposal waste tires and waste plastics

Waste tyre prototype using directly.Used as a port and ship fender, wave the levee, floating lighthouse, highway traffic wall screen, road signs, and the mariculture fish reef, amusement, etc, but very little usage, less than 1% of the amount of waste tires [2].Prototype system is a very valuable for recycling method, but this method consume the amount of waste tires is not large, so only as a means of auxiliary.

Thermal decomposition is to use high temperature heating, waste tires to decompose into oil, combustible gas and carbon powder.Waste tyre by pyrolysis no pollutants, is conducive to environmental protection and resource recycling.Thermal decomposition of the proceeds of the oil similar to commercial fuel characteristics, can be used for direct combustion or blended with fuel oil extraction after use, can also be used as rubber softener.Thermal decomposition of the proceeds of the combustible gas is mainly composed of hydrogen and methane, can be used as fuel, also can be resolved in situ combustion heating process needs.Thermal decomposition of carbon powder can be used instead of carbon black, or after processing the special adsorbent.This kind of adsorbent in water contamination, especially the toxic metals such as mercury strong filtration effect.
Over the past 20 years, Japan, the United States, Britain and the former Soviet union in pyrolysis of waste tire technology research and development.According to an American data, the use of pyrolysis technology of waste tyres, each decomposition four tyres, 3 dollars profit can be obtained.The Titan company installed the recycling pyrolysis apparatus in Korea.Also the construction of such a plant in Taiwan.British researchers recently has carried on the reform to the traditional pyrolysis technology, from the state prior to anaerobic and aerobic conditions, further improve the decomposition product of economic value, so that the technology has a broad application prospect.

PREV：Can the tire and plastic diesel can be used in the vehicle?

NEXT：Uses and application of crude oil?

Request a Quote for Pyrolysis Plant

Please leave your contact information and pyrolysis plant requirements so that our professional team can contact you as soon as possible.